When I got up in the morning and turned on the computer to download the latest set of photographs and post to the blog, I thought I could hear some big streetwork machines coming up the road, thinking .oO(what, at Saturday, 7 am?)  … but there were no trucks and the tremor proceeded … then it got intense until the windows were jarring lightly – and also the drinking glasses in the kitchen at the other side of the room. That was when I realised we were really having an earthquake …! Before I could think of what doing next, it was over again. The rest of the family was bouncing out of their beds telling their impressions vividly. Some minutes later, the GeoNet page had posted one quake near Tokoroa, but nothing in Motueka, so we wondered if it was too weak – but it wasn’t, because it was the one from Tokoroa (near Taupo/Rotorua) which had been really deep in the crust and fairly strong. Because it was a national event, stuff.co.nz wrote an article on it: http://www.stuff.co.nz/national/8054238/Swarm-of-quakes-rattles-New-Zealand

Direct links to earthquake sites on the net:

And a screenshot of the Nelson drums (GeoNet) showing the tremor (the red part means the peaks were cut off to fit onto the sheet). 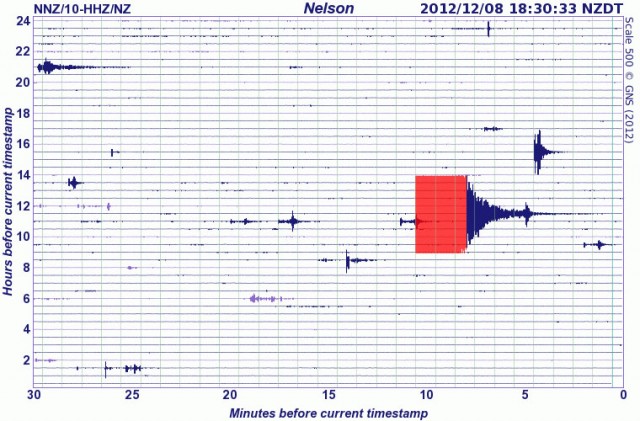